Jude Garrity visits the farmers market every Saturday. As an environmental engineering student, he’s curious about living off the grid and sustainable agriculture.

And one particular farmer.

Hudson Oliva has worked hard to support his commune, where queer people live without fear of harm or retribution. When Jude asks pointed questions about living there, Hudson realizes he needs to be honest about his home. Few people know what the farm is actually about, but Jude is insistent.

Jude moves to Kaleidoscope Gardens, however, his sexual hang-ups make it hard to adjust. He’s an uptight virgin living among people who have sex freely and with multiple partners. When Jude finally loosens up, Hudson is flooded with emotions. Falling for Jude wasn’t part of Hudson’s life plan. But when vindictive rumors about the commune begin to spread, love might be all he has left.

“You wanted to know where I’m from,” Hudson said. Jude nodded but remained tight-lipped. “I grew up north of Miami in a small city. I couldn’t wait to get out, so I tried to hitch a ride to Seattle. Didn’t get that far.”

“How far did you get?” Jude looked surprised as he asked, so Hudson reached out and pressed his palm to the center of Jude’s chest.

“About five miles away. I’ve been here ever since.”

“What made you run? I mean… maybe that’s too personal.”

Hudson coasted his hand over the slight swell of Jude’s pec and thumbed over his nipple, which stood at attention, pert and flushed, like his lips and cheeks. It was a good color on him.

“My parents sent me away to one of those ‘pray away the gay’ places, which obviously didn’t work, but it probably saved my life since my mom had to haul Papi off me when she told him why I needed to go there. He had so much pride, and having a gay son wasn’t something he could live with. It was as if me being gay made him gay. I was accosted by religion and hatred for who I was from that day until I left, so I became an expert at being secretive and learned to lie through my teeth while living with them. My eighteenth birthday Papi and I fought, and I ended up with another black eye. I packed a bag and snuck out of the house while they were sleeping.”

“Did they call the cops or anything?”

Hudson shook his head and knew his smile was pathetic. He still held hope he and his father could reconcile. He knew Papi would be proud of him and what he’d accomplished on the commune. “I left a note and eventually let them know my address, but in all the years, I’ve gotten one letter.”

“I’ve talked to my parents twice since I left, and both times left me feeling shredded inside.”

“I’m sorry.” Hudson scooted closer and pulled Jude into a tight embrace. The feel of Jude’s warm skin against his own had Hudson’s body responding in no time flat. He kissed Jude’s neck and the sharp line of his jaw. He thrust his fingers into Jude’s spun-gold hair and drew their mouths together.

Jude moved his lips, pressing chaste kisses to Hudson’s, and then he snaked his arm between their bodies. Jude splayed his fingers across Hudson’s chest and pushed him away. He hung his head, looking down at the mattress in what appeared to be shame.

Hudson took the sting out of the rejection by thumbing over Jude’s bottom lip, shiny with saliva. “You have a delectable mouth, like it’s made for kissing.”

Jude laughed. “So do you.” Then he bit his lip and made brief eye contact before scooting back a few inches.

Posy Roberts writes about the realistic struggles of men looking for love. Whether her characters are family men, drag queens, or lonely men searching for connections, they all find a home in her stories.

Posy is married to a man who makes sure she doesn’t forget to eat or sleep. Her daughter, a budding author and dedicated Whovian, helps her come up with character names. When Posy’s not writing, she enjoys crafting, hiking, and singing spontaneously about the mundane, just to make normal seem more interesting. 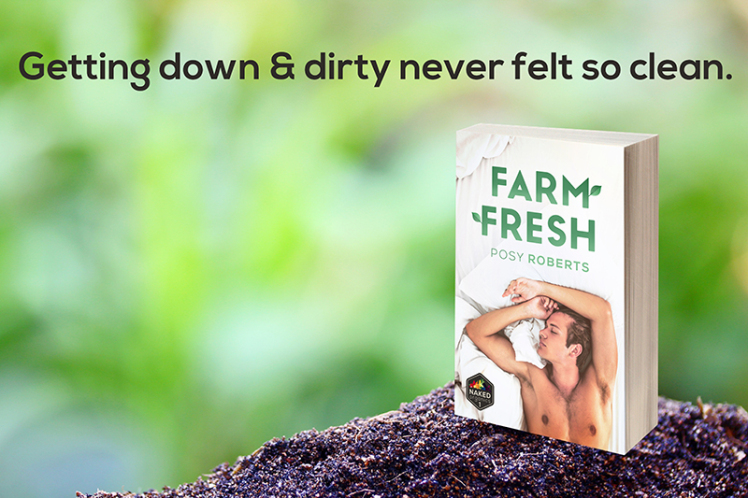 Giveaway Link: E-copy of ‘Silver Scars’ or book of choice from Posy’s backlist