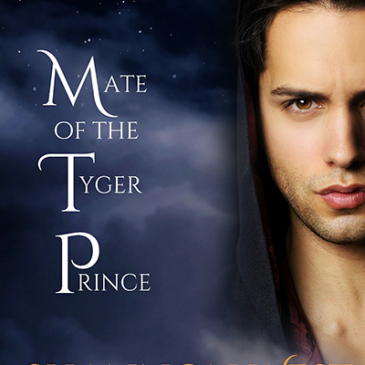 Series: Mate of the Tyger Prince

Diplomatic marriages between two members of different planets certainly aren’t unheard of—but for Prince Mikos of Tygeria and Col. Ryan Donnelly of Earth, it might just be a fate worse than death. The union is meant to end a devastating war that has lasted for over a hundred and fifty years, but when the female bride intended for the fierce, sexy prince runs away, her handsome brother is substituted instead. Men are for mating as far as the Tygerian prince is concerned, but the colonel also happens to be Mikos’s sworn enemy, not to mention being completely irritating.
Ryan is horrified to learn that the Tygerians not only expect him to take the place of his sister, marry the Bloody Prince of Tygeria, and go to live with him on his mysterious planet, but they also expect him to undergo physical alteration to have the man’s baby! And nobody is taking hell no for an answer. Ryan’s being asked to turn his whole life upside down and the handsome Tygerian gets under his skin like nobody else. But with the fate of the universe at stake, how can he say no? Can the two enemies put aside their differences and focus on making love and not war—not to mention a baby? As a powerful love struggles to take root, can they learn to trust each other and stand together against the forces that are trying to tear them apart?

“Son, are you all right? Your highness…Consort Blake, please! Put a stop to this now—my son is injured!”

“I’m fine, Father,” Ryan said, embarrassed and trying to gently push him off.

“Your son is injured?” the king’s consort said, his eyebrows lifting in outrage. “What about my son? Your son indeed!”

Then as the words sunk in, Blake suddenly straightened up and tilted his head, one eyebrow quirking upward. “Did you say your son?”

“Yes, of course he is! And your son just attacked him!” the consul said, casting a wounded, outraged look back over his shoulder.

Blake smiled then and rubbed his hands together, as eager as a cat who’d just spied a big bowl of tasty cream. “You mean to tell me this young man… Your unmarried son? Well, why didn’t you say so? Who needs the daughter? This one will do fine. In fact, he’ll do even better!” He stepped forward and laid a hand on Prince Mikos’s arm. “Stop playing with him, Miki. You’ll have plenty of time to do that after the wedding. This young man,” he said, gesturing grandly toward Ryan, “is your new mate and royal consort.” He got a speculative look in his eye. “Maybe even the bearer of your children.”

Shannon West lives in the South with her husband and family. A lover and avid reader of M/M romances, she began writing them a few years ago and now has over forty short stories, novellas, and novels to her credit. She is a two-time finalist in the Rainbow awards for 2013 and 2014, and an honorable mention for 2015 and named an All Romance ebooks top ten author for 2013 and 2014. She writes shifters, primarily and some BDSM and contemporary. She loves men and everything about them, and believes that love is love, no matter the gender. She mostly spends her days at the keyboard, trying to elude housework, which stalks her relentlessly. 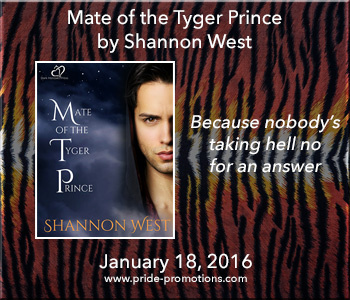 Giveaway Link: E-copy of ‘Mate of the Tyger Prince’ by Shannon West