Today I’m very lucky to be interviewing Lane Hayes, author of A Kind of Truth.

Hi Lane, thank you for agreeing to this interview. Tell us a little about yourself, your background, and your current book.

Thank you for having me today! My newest release, A Kind of Truth, is book one in my newest series. It’s a spin-off of the Better Than series. Rand O’Malley was featured in Better Than Safe (he was Seth’s best friend :) ), but he’s the star of this one! Rand was such a fun character to write. He’s the strong-willed, charismatic lead singer of Spiral and he’s determined to make his dream of rock and roll superstardom come true in the Big Apple. What he doesn’t plan on is meeting… and needing the help of someone like Will. Will is a reserved, quiet band geek. Not the kind of guy Rand would usually look at twice. This is an opposites attract story. The rock star wannabe and the geek!

A Kind of Truth is my eighth published book with Dreamspinner Press and my third series. I’m a lifelong lover of romance stories and once I found MM, I was thrilled. As the mother of a gay son, I’m convinced that stories of hope and love featuring LGBT characters are vitally important.

1) How do you feel about e-books vs print books?

I love them both, but honestly I read almost exclusively on my Kindle nowadays. When it comes to my books, I want instant gratification!

2) What process did you go through to get your first book published?

I took a chance! Lol. I had a story in my head and decided to write it down. When it came time to look for a publisher, I went to the sites of those whose books I’d read. Dreamspinner Press was one of them. I felt like they had one of the most comprehensive submission guidelines, so I went for it. They accepted the book after eight weeks. Then came editing, cover art selection, blurb writing and finally proofreading the galley copy. That story was Better Than Good. I haven’t looked back since!

3) How do you find or make time to write?

I write everyday. I find that I get more accomplished in the morning, so I carve out six to eight hours (more or less, depending on the day) beginning at the crack of dawn and try to get as much done as possible. Writing requires lots of discipline!

4) Name one person who you feel supported you outside of your family members?

I have two close friends who’ve shown support for my writing. I truly appreciate it because I think most of the time they don’t know what to ask! Lol. I’m just grateful they know that my writing is an important aspect of my life and they care enough to inquire about my books and characters. It means a lot because authors tend to spend a lot of time alone. It’s easy to feel disconnected with the real world. Friends and family are important touchstones!

5) Tell us about a book you’re reading now.

I’m finishing Gillibran Brown’s Christmas at Leo’s. It’s an MMM relationship with domestic discipline which isn’t always my cup of tea, however… I LOVE Gilli! He’s absolutely hysterical! It’s best to read his books in order because they’re written as a journal documenting his everyday life with his two older partners. The first one is Fun with Dick and Shane: Memoirs of a Houseboy. Granted, these books aren’t for everyone, but I think the author is very insightful and I adore his sense of humor! Next in line is a reread of Age of Innocence for my book club. What can I say? I have quirky taste! MM romance is my favorite but I love classic romances too. :)

Book Name: A Kind of Truth

Series: A Kind Of

Rand O’Malley dreams of superstardom. He hopes to one day sing the blues like a rock god. Moving to New York City and hiring a new manager are steps to make his dreams a reality. But nothing moves as fast as Rand would like, and everyone has opinions, which include he keep certain pieces of himself quiet if he plans on making it in the Big Apple. Like his bisexuality.

Will Sanders is a gifted musician who dazzles Rand with his ability to coax gorgeous notes from an electric guitar one moment and play the piano like a professional the next. He’s a geek, but Rand isn’t concerned about Will’s pressed exterior clashing with his tattoos. His focus is music. Yet there’s something about Will that makes Rand think there’s much more to the quiet college student than he lets on. As Rand’s dreams begin to materialize, he’s forced to reconsider his priorities and find his own kind of truth. One that might include Will.

Excerpt for A Kind of Truth by Lane Hayes:

Watching Will’s face turn pink then red was extraordinarily entertaining. I nudged his elbow playfully and tried to gain control of my smile before it threatened to take over my entire face. When I couldn’t take the building pressure of emotion, I winked at the girls then leaned in and kissed his lips, loving that I took him by surprise. The elevator doors slid open a moment later. Will stepped into the empty corridor and gave me a wide-eyed incredulous stare.

“I cannot believe you just did that.”

“What? Kissed you on an elevator? It’s not like farting, ya know.”

Will huffed a sigh that clearly said he thought I was hopeless before turning to walk down the hall. “I was talking about the underwear comment but yeah, the kissing part was awkward too. No one wants to watch two people going at in a confined space. And besides, we’re supposed to be playing this strictly straight while we’re in public.”

He stopped to unlock the door to the classroom then pushed it open, pausing to give me a perturbed look before he moved inside ahead of me. I barked a quick laugh as I set my guitar on the back table and shrugged my jacket off.

“First of all, that was hardly going at it. It was a peck. You were the one advertising I left my clothes at your place in front of a couple cute girls. And who said anything about playing straight?”

“Were we not in the same room two mornings ago talking about this?”

“We were. In fact, we were naked in your bed. Decidedly un-straight. But the way I remember it, I was one who was holding back the gay while you were the one going for it. But let’s go back to the elevator. I think you purposefully blew my cover back there with those girls. Were you jealous?”

He snorted and rolled his eyes. “You’re unbelievable.”

“It wasn’t a compliment,” he quipped as he made his way to the piano.

“Well, the next time you announce you’re holding my underwear hostage in a crowd, all bets are off, baby.” I gave him a lascivious once-over and waggled my eyebrows before tightening the strap on my guitar.

Will chuckled. “I’ll keep that in mind. But I’m pretty sure your tighty-whities never came up. My comment was perfectly innocent. There’s a big difference between hats and underwear.”

“I’m on to you, Will. You wanted those girls to know something’s going on between us. They’re probably talking right now. Bet they’re wondering if we’re in here having sex. Hell, they could be outside that door listening. Maybe we should give ‘em something to talk about.” I made a show of unbuckling my belt and the top button on my 501s. “Is there a camera in this room?”

“Keep your pants on. I’ve got two months left till graduation and I’d prefer not to get kicked out of school, please,” Will said primly, smacking my hand away.

“You won’t get kicked out. I doubt we’d be the first anyway.”

I rezipped my jeans and started to back up, but at the last second, I reached out to cup his chin between my thumb and forefinger. I traced his jaw and let my thumb roam higher to caress his cheekbone just under his glasses. His eyes fluttered shut. I loved the contrast of his fair skin and darker lashes and eyebrows. He was so damn pretty. And those lips. They were sensuous. That was the word. I leaned in and brushed my nose against his. I could feel his breath on my lips. The urge to plunge my tongue inside and take what I was very sure we both wanted was strong, but I waited for his permission.

When he didn’t respond, I let my hand fall to my side and started to pull back. Maybe he really was serious about propriety in the classroom. I wasn’t used to curbing my impulses to suit someone’s else’s sensibilities. I’d spent twenty-five years doing only what I wanted. Screw anyone else. Now here I was, attempting to hide my gay side publicly while trying to follow Will’s lead in private. It felt strange, I thought, just as Will launched himself at me.

I grunted in surprise when he wrapped his arms around my neck and crashed his mouth over mine. He softened the connection and tilted his head as he raked his fingers through my hair. I responded but let him control the tempo. Until he tentatively licked my lips. Fuck, he tasted sweeter than I remembered. Like peppermint candy or hot chocolate. I pulled him flush against my chest and slid my tongue alongside his, twisting and colliding in a passionate fusion. When he gasped for air I pulled back only to have him grind his hips into mine and lick my jaw. He swayed into me with a moan and lost his footing.

Will was sexier than he knew, which spelled potential danger for me. It was better to let the music take over for now.

Lane Hayes is grateful to finally be doing what she loves best. Writing full-time! It’s no secret Lane loves a good romance novel. An avid reader from an early age, she has always been drawn to well-told love story with beautifully written characters. These days she prefers the leading roles to both be men. Lane discovered the M/M genre a few years ago and was instantly hooked. Her debut novel was a 2013 Rainbow Award finalist and subsequent books have received Honorable Mentions in the 2014 and 2015 Rainbow Awards. She loves red wine, chocolate and travel (in no particular order). Lane lives in Southern California with her amazing husband and the coolest yellow Lab ever in an almost empty nest. 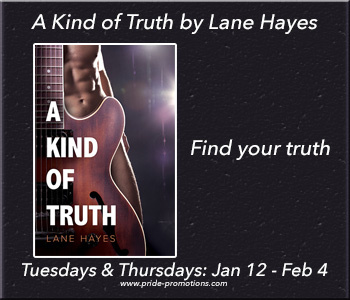 Giveaway Link: $20 gift card from retailer of choice and choice of book from Lane’s backlist