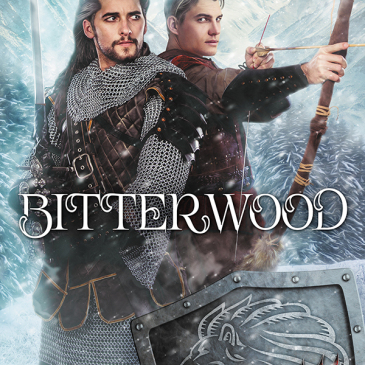 Outrunning a winter storm in the north, Captain Faran of the Kingâ€™s Guard leads his men and a young mage named Meric to shelter at Bitterwood Manor, the ancestral home of the Daenes. Faran and his troops have been searching for weeks for a mysterious, lion-like beast that reportedly haunts the uncharted northern woods. For Meric, finding that prophesied cat is a matter of life and death.

Though Faran is deeply focused on their mission, the enigmatic Joss Daene, Lord of Bitterwood, fascinates him. Strong and proud, Joss is everything Faran wants in a lover. More, if he were honest. But Joss belongs to Bitterwood, and Faran to his duty.

Together they will need to brave the oldest, darkest part of the Bitterwood in the coldest, deepest snows of winter to find the legendary cat. But time is running outâ€”for Meric, for the kingdom, and for Faran and Jossâ€™s fledgling love.

In her copious spare time (hah) she does needlework, calligraphy and illumination, and makes jewelry.Â  She has a masterâ€™s degree in history from the University of Chicago, is a member of the Society for Creative Anachronism, and lives in a Chicago suburb with the obligatory Writerâ€™s Cat and way too many books.

To celebrate the release ofÂ Bitterwood, one lucky winner will receiveÂ a $15 Amazon Gift Card! Leave a comment with your contact info to enter the contest. Entries close at midnight, Eastern time, on September 24, 2016. Contest is NOT restricted to U.S. entries. Thanks forÂ followingÂ the tour, andÂ donâ€™t forget to leave your contact info!

â€śIâ€™ve never seen that happen before,â€? Eidar said as they made their way back down the steps into the undercroft. â€śIt was amazing.â€?

â€śYou saw. That boy and Eissa. They just knew. Father said that sometimes happens with us Daenes, when we meet our true loves, but Eissa had a girl he liked. Or used to. Anyway, I didnâ€™t even know he liked men. I donâ€™t think he knew. And that boyâ€”â€?

â€śI wish I had not,â€? Faran said dryly. â€śEnjoy your youth, boy, while you can.â€?

They went out a side door nearer the stables, where the man Wuluf was tying a thick cord to a stone post at shoulder height. There were perhaps only a dozen yards between the stable door and manor, but the wind had already begun to bite, and a few flakes were starting to circle down from the lowering sky. Wuluf finished, then looked up at them. â€śAnother quarter hour, Iâ€™m guessing, before she starts. You can check with your sergeant, but when I left them a moment ago they were settling in snugly.â€?

â€śI will. Thank you for setting the rope out.â€?

Wuluf grunted in lieu of thanks, but went on to say, â€śAnimals canâ€™t tend themselves, but men can. Your troops will be safe enough for three days, and the gale will blow itself out by then. So says me lord, and heâ€™s never wrong.â€?

â€śYouâ€™d best go quickly,â€? Eidar said, shivering. â€śFather wants you to come back in. Iâ€™ll wait inside. Pull the bell rope when youâ€™re back.â€? He pointed to a loop of cord hanging beneath the eaves.

â€śIâ€™ll be back in a moment,â€? Faran said, and left them to their bickering.

Wuluf was right. The men were settled in. The stable boasted loose boxes rather than smaller stalls, which were filled with clean hay, and their horses were happily crunching on the grain in the mangers. The men were gathered around a small fire in the hearth on the far wall.

Sergeant Aldin rose when he saw Faran approaching down the long corridor between the stalls. â€śSir. All settled, as ordered. That man-at-arms brought over fresh suppliesâ€”enough for a week.â€?

â€śGood,â€? Faran said. â€śIâ€™ve been told it will be three days. Donâ€™t gamble away your savings in the meantime.â€?

Faran regarded them all in the warm light from the hearth. â€śAh, lads, Iâ€™d stay with you and enjoy it more, but Lord Meric is my primary responsibility this time.â€?

â€śAye, sir. Weâ€™ve known that all along. And timeâ€™s precious.â€?

â€śTrue enough,â€? Faran said. â€śGood eâ€™en, men. Rest well.â€? He hated to leave the warm circle of light. Most of the men had been with him five or more years, some since his first posting, and theyâ€™d all become friends on the various missions theyâ€™d undertaken for the king: first the true king, then his brutish successor, and now again for the true heir. There wasnâ€™t one among them he wouldnâ€™t trust with his life and, more importantly, with Mericâ€™s life.

Thank all the gods that theyâ€™d found this place in time to take shelter and had Mericâ€™s assurances that the folk here would be hospitable. Most of these outlying manors were, but heâ€™d had some frightening experiences with some that werenâ€™t. Here, though, the provender would be fresh and healthy and the shelter safe.

He found his mount in a loose box, along with his saddlebags and the important leather tube that held his writ. It wore a strange horse blanket with a yellow cat in rampant position stitched on one side. He stared at the cat a long moment, wondering if that was a sign or just a coincidence. Then with a sigh, he flung the bags over his shoulder and picked up the rest of his gear to carry back with him.

When he opened the door, the wind nearly took it from his hand, slamming it back against the wall and straining the hinges. With an effort, he shoved it closed and staggered against the wind to the side door.

It opened before he could reach for the cord, and hands drew him into the warmth of the undercroft. He looked up to thank Eidar, but it was Daeneâ€™s warm dark eyes that met his, and his strong hands that had pulled him in out of the wind. They stood wordless a moment in the dimness, then Daene pushed the heavy door closed and dropped the latch.

â€śYouâ€™ll bunk with us, in our quarters,â€? his host said with a curt nod. â€śEidar will sleep with the guardsâ€”youâ€™ll share with Meric and I with Eissa.â€?

â€śWeâ€™ll talk later. Letâ€™s get you settled and fed. Your men are comfortable?â€?

Faran nodded. â€śIn finer surroundings than many a man this night. Your stables are some of the best Iâ€™ve seen and well provisioned. My man said you sent over fresh food for them. Iâ€™m grateful.â€?