Hi, and welcome to the blog tour to celebrate the release of Adulting 101 by Lisa Henry. I’m visiting some of my favourite blogs around the place to talk about writing Adulting 101, some of my influences and inspiration, and even sharing an excerpt or two! Don’t forget to leave a comment for your chance to win a prize! 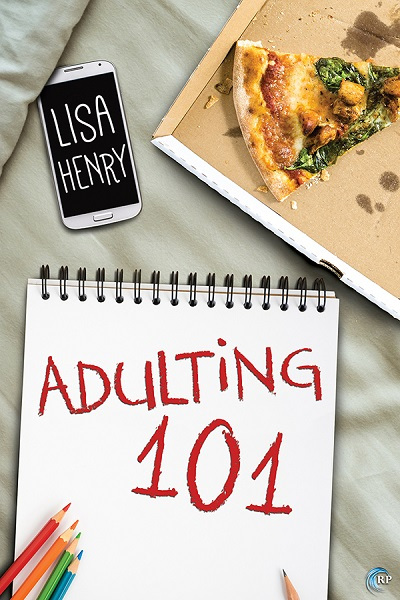 The struggle is real.

Nick Stahlnecker is eighteen and not ready to grow up yet. He has a summer job, a case of existential panic, and a hopeless crush on the unattainable Jai Hazenbrook. Except how do you know that your coworker’s unattainable unless you ask to blow him in the porta-potty?

That’s probably not what Dad meant when he said Nick should act more like an adult.

Twenty-five-year-old Jai is back in his hometown of Franklin, Ohio, just long enough to earn the money to get the hell out again. His long-term goal of seeing more of the world is worth the short-term pain of living in his mother’s basement, but only barely.

Meeting Nick doesn’t fit in with Jai’s plans at all, but, as Jai soon learns, you don’t have to travel halfway around the world to have the adventure of a lifetime.

This is not a summer romance. This is a summer friendship-with-benefits. It’s got pizza with disgusting toppings, Netflix and chill, and accidental exhibitionism. That’s all. There are no feelings here. None. Shut up.

You can find out more about Adulting 101 at Riptide.

Lisa likes to tell stories, mostly with hot guys and happily ever afters.

Lisa lives in tropical North Queensland, Australia. She doesn’t know why, because she hates the heat, but she suspects she’s too lazy to move. She spends half her time slaving away as a government minion, and the other half plotting her escape.

She attended university at sixteen, not because she was a child prodigy or anything, but because of a mix-up between international school systems early in life. She studied History and English, neither of them very thoroughly.

She shares her house with too many cats, a green tree frog that swims in the toilet, and as many possums as can break in every night. This is not how she imagined life as a grown-up.

Each comment on this blog tour enters you for a chance to win a $20 Riptide credit and an ebook of your choice from my back catalogue. You’ll also win a super secret cute little gift that’s very close to my (and Nick’s) heart! Entries close August 20, and contest is not restricted to US residents. Remember to leave your email address in the comments so I can contact you if you win!

Nick: Holy shit dude, u have to help me!

Devon: What u do?

Nick: Remember how my dad got me this job so I’d “straighten up & fly right” before college?

Nick: There’s a guy at work I want to do things to. With my tongue & my dick.

Nick: If I suck his dick on the site I’ll probably get fired right?

Jai Hazenbrook is ridiculous. Firstly, there’s his name. If Nick were on a quest to return the One Ring to the fiery pits of Mount Doom, Jai Hazenbrook would totally be the hot-as-fuck elf in tight leather pants who could shoot the left testicle off an orc at a thousand paces. Whereas Nick, of course, would be the short hairy-footed guy who liked beer and fireworks and second breakfasts. Even in his fantasy worlds, Nick is a realist.

What? He’s been waiting for another growth spurt, okay? He doesn’t want to be a giant or anything. He just wants to crack five foot ten, really. Five foot ten feels a lot more respectable than five foot seven.

Nick’s been waiting on his growth spurt since he was fifteen. He’s eighteen now and starting to think it’s never coming. Not that he obsesses about it or anything. He’s got much more interesting things to obsess about.

Jai Hazenbrook is tall, fuck him.

He’s tall and has features that can really only be described as chiseled, if Nick’s late-night research into romance novels can be believed. Which they probably can’t. Otherwise surely Jai would also wear kilts and be a millionaire, but whatever. He’s tall, and he’s chiseled, and he has incredible eyes that sometimes can’t decide if they’re blue or if they’re gray, but are usually narrowed in Nick’s direction in a glare. A why-the-fuck-is-this-kid-always-staring-at-me glare.

Nick is not always subtle.

Which is why he’s pretty sure he’s going to be fired by the end of the week.

Nick’s dad got him the job at Grover Construction. Disappointingly, it has nothing to do with the Sesame Street puppet, because Nick totally would have been down with that. Harvey Grover is one of his dad’s clients. His dad is an accountant. A certified public accountant. It’s his life’s deepest regret that he’s dedicated himself to pecuniary responsibility, and has somehow managed to raise a son who “doesn’t understand the value of a dollar.” Hence this experimentation with a “job.”

Look, Nick likes having a job. It’s just Mr. Grover very sensibly doesn’t trust him much around the actual construction parts of the construction job. Because power saws and nail guns. So it kind of means Nick answers the phone, and runs errands to the sites and back, and spends as much time as he can staring at Jai Hazenbrook’s fucking perfect ass.

It is seriously fucking perfect. It’s the sort of ass that should inspire goddamn poetry. Nick’s not the kind of guy who can write sonnets or anything, mostly because he can’t remember how to, but if he happens to have a page in his notebook dedicated entirely to ass-related haikus, that’s his business, right?

That ass is so hot.

I would totally hit it.

Nick’s haiku skills are maybe a little rusty too, but at least the sentiment is heartfelt.

When Nick’s dad arranged this job, well, of course Nick drifted off to sleep with visions of hot construction guys dancing in his head. The visions, not the guys. The fantasy guys did not dance. They just kind of stood around and struck poses, making their unnecessary abs tighten right up, like they were in a Diet Coke commercial or something. Even then, Nick knew the reality wouldn’t be so sweet. There would be no come-hither looks from hot-as-the-sun shirtless construction guys. No. There would be hairy backs and beer bellies and lots of ball scratching but not in a fun way. Nick knows the difference between fantasy and reality.

Which is why Jai Hazenbrook has no fucking place in reality.

Which is why whenever Nick is sent out to the site Jai works on, or Jai comes into the office for something, Nick’s brain kind of goes offline. It shuts itself down into a protective coma in case Nick starts believing in unicorns or something. Jai Hazenbrook simply does not compute.

And Nick is totally, absolutely going to suck Jai’s mythical elf unicorn dick if it’s the last thing he does.

Which, at least as far as his job at Grover Construction goes, it probably will be.