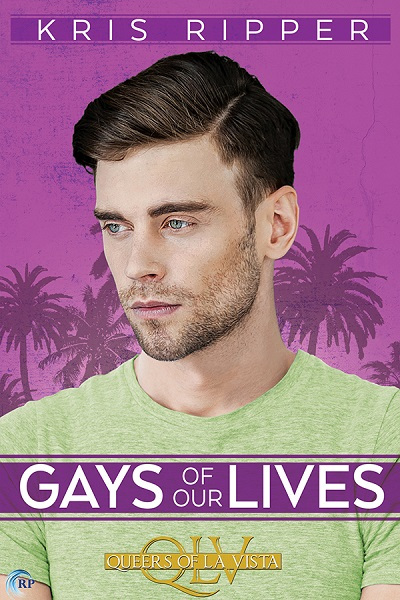 GAYS OF OUR LIVES

A Queers of La Vista Novel

Emerson Robinette only leaves his apartment to get laid and go to work. Having MS—and trying to pretend he doesn’t—makes everything more complicated, especially his fantasies of coming on strong and holding a guy down. Finding a partner who’ll explore that with him isn’t Emerson’s idea of a realistic goal.

Until a chance meeting with a hipster on a bus makes him reconsider. Obie is happy, open-hearted, and warm; what’s more, he gets his kicks being physically dominated, spanked, and teased until he’s begging. It would be perfect, except for one thing: Emerson isn’t made for happiness, and he doesn’t see how a guy like Obie would settle for a cynic like him.

But as far as Obie’s concerned, the only thing keeping them apart is Emerson. Can Emerson handle a boyfriend who’s more invested in his future than he is? Emerson’s barely convinced he has a future. But when Obie’s smiling at him, anything seems possible.

Kris Ripper lives in the great state of California and hails from the San Francisco Bay Area. Kris shares a converted garage with a toddler, can do two pull-ups in a row, and can write backwards. (No, really.) Kris is genderqueer and prefers the z-based pronouns because they’re freaking sweet. Ze has been writing fiction since ze learned how to write, and boring zir stuffed animals with stories long before that.

To celebrate the release of Gays of Our Lives, Kris is giving away your choice of ebook from zir backlist. (Any release from Kris Ripper prior to Gays of Our Lives.) Leave a comment with your contact info to enter the contest. Entries close at midnight, Eastern time, on July 16, 2016. Contest is NOT restricted to U.S. entries. Thanks for following the tour, and don’t forget to leave your contact info!

I was hungover for a couple of days after that night at Club Fred’s. To be honest, I think it was a humiliation hangover more than a physical one; later I realized that it had only really been a moment of stabby pain, some inconvenient numbness, and me being clumsy. If I’d pulled my shit together instead of freaking out, I probably still could have gotten laid. Hell, if I’d let Joey-with-the-DJ-Rixx-face walk me out, I probably could have gotten laid.

On the bus to work Monday morning, I contemplated my uselessness, which is always a good look on me. I’ve never seen it in a mirror, but I’m pretty sure my expression resembles a dog’s after being scolded and it’s staring at you with its head on its paws, but its eyes follow you pathetically wherever you go.

My eyes didn’t have anyone to follow. Until they did.

Damn. Look at him.

He was a little too hipster for my taste: cloud-pale skin, long brown hair, unnecessary layers of clothing, even for March. Tight jeans tucked inside heavy black boots.

The boots looked like the only real thing about him. The rest—red shirt, red flannel over it, black vest over that, battered brown suit coat over that—could have been a cardboard cutout of anyone.

Fuck. I have an eyes thing. He had this strong brow, but the hazel eyes underneath it were bright.

I didn’t really expect to see new people on the bus in the morning. There were always some, but I commute every day. The folks in my neighborhood and the folks on my bus line are pretty familiar, and this guy wasn’t one of them. And I noticed him because he was tall, and his boots looked like he lived in them. I don’t know how sometimes you can tell the difference between “bought worn out” and “worn until worn out” by looking at someone, but I would have bet money that even if his jacket had looked threadbare when he pulled it out of whatever thrift store he favored, those boots had only known his feet.

When I finally wrenched my eyes away from his boots, he was looking right at me. Of course he was.

I flushed hot and turned to the window, tightening my hands on my messenger bag. Then five seconds later I looked back. Because I’m weak.

He smiled. The partial hipster with the motorcycle boots smiled at me. I liked his smile as much as I liked his eyes.

That should have been it. I was in the first row of seats by the window. He was on one of the perpendicular sets. The bus wasn’t that full, and I had no idea where he was getting off.

Three old ladies boarded, each with a purple hat, and my cute booted hipster offered them the long bench he was sitting on. They fussed appropriately, and I mourned the loss of our slightly flirtatious glances across the bus.

Until he slid into the seat next to mine.

Listen, maybe people pick each other up on city buses all the fucking time, but I can tell you I’ve never done it. I looked into his damn eyes and said . . . okay, nothing. For at least thirty seconds.

He smiled again and held his hand out toward me. “I’m Obie.”

“Yeah.” I belatedly tried to shake his hand, but instead of shaking, he held mine. “I’m Emerson. Robinette.”

“Until right this minute I was really annoyed my bike broke down. Meeting you might make it worth it.”

He tapped his fingertips against my knuckles. “I don’t know. I just . . . like the look of you. Emerson’s a great name. Like the writer, right?”

“I think my parents read my name in a book, or maybe heard it in a song.”

My stop was fast approaching. I’d have to get around him. Should be fine. No problems with my leg since Friday.

Still, I felt for my cane.

“You getting off soon?”

I shrugged. “At Horizon and Second.”

“Enough time for me to get your phone number. Unless I’m, uh, barking up the wrong tree?” He arched one dark eyebrow at me. Up close I confirmed my theory about the jacket: it was worn the way something gets when you wear it every day, at the cuffs and elbows, but not quite at the right spots for his body. This had been previously owned by a man with shorter arms, I decided, as if it mattered.

He pulled out a phone and looked at me expectantly.

Right. I reeled off my numbers, and he entered them, then went through the “text you my number” ritual.

Then I had his number. Obadiah. Obie. I secretly liked his name.

He moved out of the way while the bus was still rolling, but I wasn’t about to risk my balance until it stopped, even though he was giving me a strange look because I didn’t immediately get up.

When I shifted out into the aisle in front of him, I gripped the bar hard so there was no chance I’d fall in front of the handsome hipster.

I should have said Sure, but what I actually said was, “I kind of hate that.”

He grinned. “I’ll never do it again, promise.”

Damn. I got myself down the stairs and tried not to swoon against the bus shelter. We’d been sitting on the far side of the bus where there was no way for him to see me, so I shook out my cane for the walk to work. I don’t have big walking problems, but a little extra support for the quarter mile was a good idea after the weekend.

And there he was. His face. Up against the back window. Watching me limp with my fucking cane. It wasn’t exactly an “O” of comic horror, but he definitely looked shocked.

I turned and hobbled my ass away, probably trying too hard to look halfway dignified while I did.