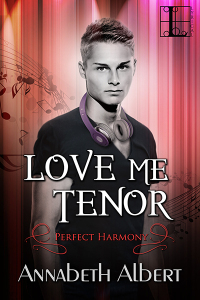 Love Me Tenor by Annabeth Albert
My rating: 4 of 5 stars

Love Me Tenor is a totally adorbs, interracial, New Adult, MM romance. A capella singer, Trevor came from a very conservative Christian household which disowned him when he came out. He is broke, has health issues, and doesnâ€™t have many options after graduating from college, so he joins a singing competition where heâ€™s placed in a boy band called Stand Out! The producers want to brand the group as gay couples and play up their cute factor, because the band that has the most likes and is most popular on social media will win the competition.

Trevor is paired with an African American, Jalen, whom Trevor stereotypes as a straight jock. Straight jocks happens to be exactly Trevorâ€™s type, because he doesnâ€™t want and doesnâ€™t believe he deserves a real emotional, human connection. At first, Trevor and Jalen donâ€™t like each other. Trevor doesnâ€™t want to pretend to be boyfriends with a straight guy; he doesnâ€™t want to be boyfriends with anyone. Jalen doesnâ€™t like how Trevor makes assumptions about who he is and who he likes. Being black, heâ€™s dealt with being stereotyped all his life.

But when they room together, Trevor canâ€™t hide his attraction for Jalen, and Jalen reveals that he really is gay. While pretending to be boyfriends, they canâ€™t avoid interacting, and as they grow closer Jalen feels protective toward Trevor and wants to show Trevor how to like himself and accept Jalenâ€™s caring attention and affection. Jalen has a need to fix the people in his life and make sure theyâ€™re taken care of. The book doesnâ€™t quite explain why he has this particular caretaking need. Perhaps itâ€™s because he wanted to make sure the people in his life didnâ€™t leave him since he was bounced around foster homes until his moms adopted him.

Jalen is a funny, cocky guy, and all his one liners made me laugh. However, I wasnâ€™t a big fan of how Jalen as an African American POC was described as having “caramel skin,” which is too familiar and inauthentic. Jalen would never describe himself that way. Instead, he sees himself as brown-skinned, which is an authentic perspective.

The secondary characters had their own dramas and stories, which provided some funny moments as well. Love Me Tenor is a fun, emotionally intense, heartwarming, and entertaining MM romance.

*ARC received from NetGalley for an honest review.