In a time when memoirs are often less than they claim to be and essays do not say enough, Justin Chin breaks onto the scene with a collection that is a combination of confession, tirade, journalism, and practical joke.

Mongrel is a cross-section of Chin‚Äôs imagination and experiences that calls into question what it means to be an Asian-American in San Francisco, the effect your family will always have on you, and the role sexuality plays in your life. Whether it be Internet pornography or family history, Chin manages to dig deep and uncover not only the truths of everyday life, but also the absurdities that surround them.

Mongrel is an exploration and distillation of the experiences and imagination of a gay Asian-American whose sensibilities were formed by the maelstrom of ‚Äô80s American pop culture. A unique collection from a brash, funny new voice.

So, I‚Äôve checked into the hospital for a quick snip. The procedure went as smoothly as possible for a patient who had seen The Exorcist III only two days ago on cable. The scene where the devil kills all those people in the hospital was fresh on my mind.

Everything was fine when I was discharged. I felt strangely all right even though I had been through some minor surgery. I felt like renting movies for the night, going to Boston Market for dinner, and maybe even having an extra chocolate fiesta. I was fine and dandy until the last bits of the epidural wore off at about midnight. Then it felt like there was something in my ass.

Do you know that feeling when someone you‚Äôre really hot for has fucked your butt really long and hard? Well it feels nothing like that. It feels like there is an eternal fight between good and evil in my ass. This is how I cope with the pain in my ass. I imagine that there are three elves who live in my ass. Kiki, Rupert, and Chunks. They are the Colon Elves. They are kind of like the Smurfs, but more dusky and fibrous. Maybe like the Chipmunks but not as musical and with regular voices. Usually, they get along fine, living in harmony with the elements, and visiting each other with bags of Pepperidge Farm Milano cookies, but most of all, they just love having picnics. But sometimes they have wild adventures, too. Like the time the elves went off in search of hidden pirate gold after Chunks found the treasure map but they had to do it hot on the heels of a bunch of evil thieves who wanted nothing more than to snatch the gold from the elves‚Äô little hands. The trail was long and hard and, guided by that tattered map, the elves had to solve clue after clue along the way to help them on to the next step, and… wait a minute, that‚Äôs the Goonies, not the Colon Elves. The Colon Elves do have wacky adventures, they‚Äôre just too modest and reserved to talk about it much.

“Agent Mulder, you believe me, don‚Äôt you?” I‚Äôd ask with a plaintive look in my eye. And then Agent Scully would conduct an examination of my ass. Bent over on the examination table, I‚Äôd hear her say, “Mulder, come take a look at this.”

I try to look back. “What? What‚Äôs happening?” I want to know the truth. The truth is out there.

“Scully, don‚Äôt you see, the light fibrous texture of the fecal matter, the consistency of the blood, it all points to alien abduction. Why won‚Äôt you believe, Scully?” Mulder drones.

“Mulder, I want to believe, but there are elves in his ass.” 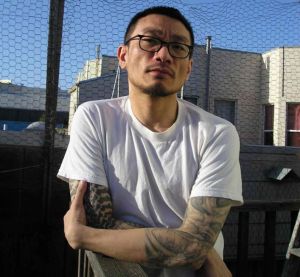 I met Justin Chin when I was a grad student in Creative Writing at San Francisco State. I can say beyond a doubt that his class “Oral Poetry” was my favorite class in grad school. Back then, I used to write poems and spoken word and read at open mics and community events in the City.

I remember the day I walked into class and took a seat at the table. The first person I noticed was a slight Asian guy slumped in the chair next to me. I thought he was a student, but when class started and seats filled up, he stood in a commanding way, as if it were a performance.

Justin Chin was only one of two people of color instructors I remember taking classes with at SF State. His class was so much fun and challenging. We practiced various exercises and performance techniques. For our final, we performed our poems in front of an audience.

We watched videos in class of other writers reading from their own work, and listened to oral poetry performed by poets Justin had invited to our class. I was so humbled and awed by their work. I bought their chapbooks, which they signed for me, and I remember telling Letta Neely how inspiring she was.

It was my most memorable experience in glad school. In a graduate program that lacked diversity at the time, it meant a lot to me that work I had written primarily for my community was validated. I remembered seeing him smile a little when I read, fierce and defiant. God, I loved his sense of humor.

I was saddened and bereft when I found out last December that Justin Chin had passed away at the age of 46. It was an honor and a blessing to have known him. Justin Chin was a lasting influence in my development as a writer.

Justin Chin, an award-winning San Francisco poet whose work has been celebrated for its bold unconventionality, mixing humor with potent political and personal themes, has died. He was 46.

R. Zamora Linmark, a fellow poet and friend, said Mr. Chin died Thursday at California Pacific Medical Center, Davies Campus, after suffering a stroke on Dec. 19. He had been on life support until Wednesday.

‚ÄúJustin Chin for over the two past decades has been one of the most heroic, acerbic, funny voices to emerge in the world of American poetry,‚Äù Paul Yamazaki, book buyer at City Lights Booksellers, wrote in an e-mail. ‚ÄúCity Lights will miss the vitality of his work both in performance and on the page.‚Äù

Mr. Chin, a native of Malaysia who later lived in Singapore, then attended the University of Hawaii, moved to San Francisco in the early 1990s, becoming an emerging voice in the Bay Area literary community.

‚ÄúJustin spent a lifetime managing complexity,‚Äù Kirk Read, a friend, wrote in an e-mail. ‚ÄúHe was at once socially awkward and a vivid public presence. His writing voice could be catty and profound, intimate and mythic, explicit and restrained.‚Äù

Read, also a San Francisco writer, said Mr. Chin helped enliven the poetry scenes of the Paradise Lounge and the spoken-word and performance art collective Sister Spit as well as the open mics of Kvetsh and Smack Dab. He was also, Read said, a ‚Äúhighly respected‚Äù presence at the Out/Write National Lesbian and Gay Writers Conference and at Litquake, the annual Bay Area literary festival.

‚ÄúHe was a solo performance artist who could mix his blood with milk and make the audience cry,‚Äù Read wrote. ‚ÄúHe was a soft-spoken visionary who could go on a rant about generations of gay men dying and then toss in a completely inane pop culture reference and have it all make sense. ‚Ä¶ He brought gravity and levity to the microphone.

‚ÄúJustin was kind of the Kurt Cobain of our writing scene,‚Äù Read wrote. ‚ÄúHe would have hated that, but it‚Äôs kind of true.‚Äù